Posted on March 7, 2014 by NikkieTutorials 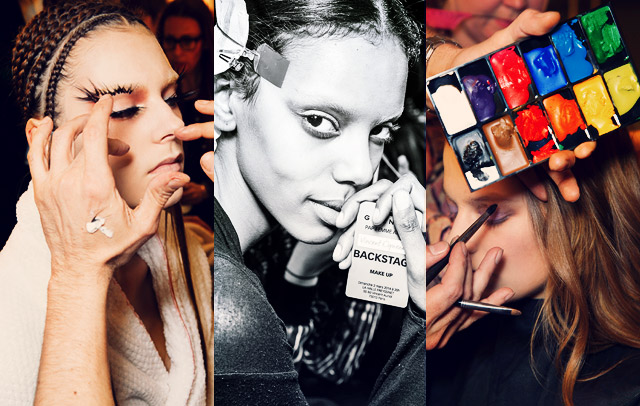 New York, London, Milan & Paris: The fashion capitols of the world. The cities where only a couple of weeks ago hundreds of models, tons of hair and makeup artists, photographers and designers got to let their creativity flow. That’s right: 2014’s Autumn/Winter fashion week.

This Fall’s Ready-to-Wear, the big trends were skin, lots and lots of skin. Soft washes of color and long doll-like lashes. Today we’re taking a peek at the 10 best —in my opinion— beauty looks at the 2014 Autumn/Winter fashion weeks… 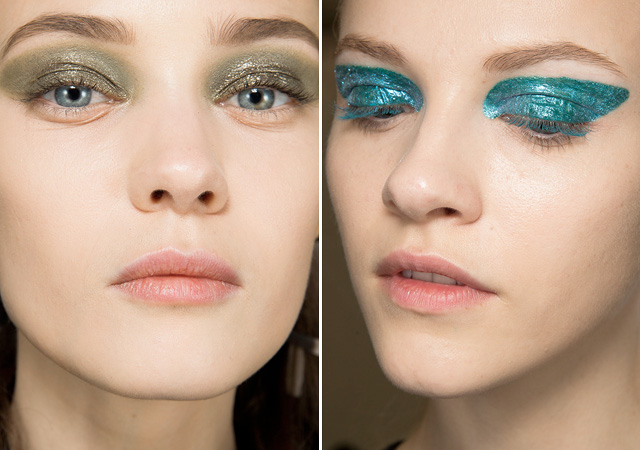 This year Dior doesn’t play it safe and wows the crowd with Cerulean Blue and Khaki Green graphic shapes. The graphic eyes —designed by Pat McGrath— were created using theatrical latex paint —a material makeup artists rarely use because it requires impeccable timing to layer products over top.— The graphic shape was sketched on with a pencil, filled in with the latex paint, then a pigment in a similar tone was gently pressed into it. Some colored mascara that matched the shade applied onto the lids, and a touch of glitter that reflected Greenish-Gold or Blue-Lavender as a finishing touch.

Fendi keeps it fresh and clean but adds a twist by only adding definition to the outer corners of the eyes. A full-coverage foundation was used to perfect complexions before it was powdered to a semi-matte finish. Then key-artist Peter Philips applied a pure White Mehron Cream Blend Stick on the cheekbones to highlight. A Taupe, matte pigment was used to shape hollows of the cheeks, and eyes were given an edgy touch with a blend of 2 Make Up For Ever eyeshadows (#17 and #165) just on the outer corners. Lips were topped off with transparent gloss. 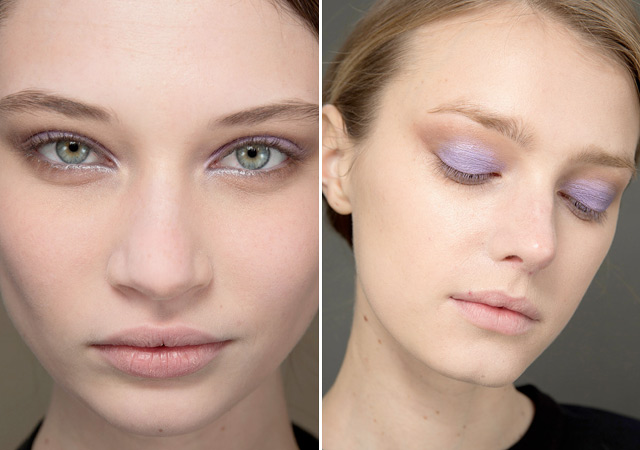 “Soft,” “fresh,” and “easy” are the key inspiration points at any given Chloé show, and the 2014 Fall Ready-to-Wear one is no different. Key-artist Diane Kendal applies an iridescent Lilac shade across the lids, created with a mushroom-colored greasepaint and MAC Eye Shadow in Beautiful Iris. For a smokey effect, she used a Taupe sculpting cream in the crease and underneath the lower lashes. Lastly, a Grey-Blue shimmer pencil was applied to the waterline for a brightening effect. 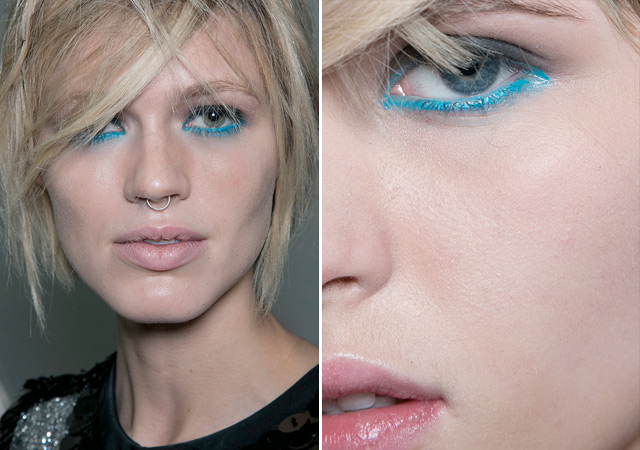 Smokey and with a pop of color. Something totally up my alley. I love how edgy and elegantly rough the models look with MAC’s Eye Shadow in Copperplate over the lid and crease. On top of that a little bit of MAC’s Scene to give it more intensity. To darken the upper lashline, key-artist Lucia Pieroni used the Technakohl Liner in Graphblack and Carbon eyeshadow. For the amazing pop of bright Sky Blue, Lucia run the Chromagraphic Pencil in Cyan along the entire length of the lower lashline and into the inner triangle of the eyes. 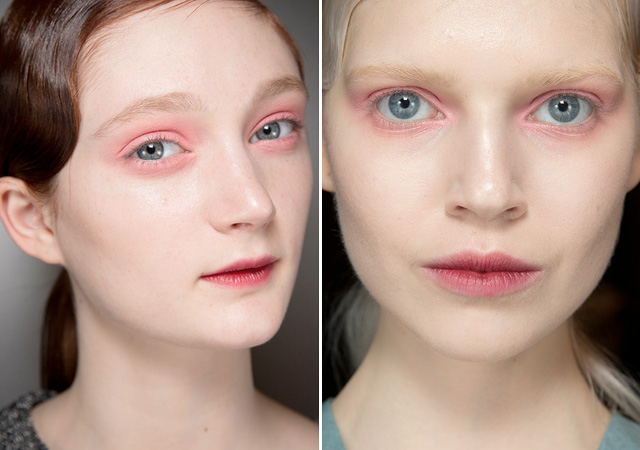 The soft wash of romantic-Pink along the eyes, beautifully illuminated, glowy skin and pop of blood-Red on th lips have me swooning over this look. It’s soft and feminine, but still very strong for the runway. Key-artist Lucia Pieroni highlights complexions with my favorite MAC Pigment in Vanilla. A mix of MAC Pigment in Orange and Paint Stick in White was buffed around the eyes, over the lids, and onto the lower lashline. To make the face look slightly more alive, a blood-Red color was pushed into the center of the lips. 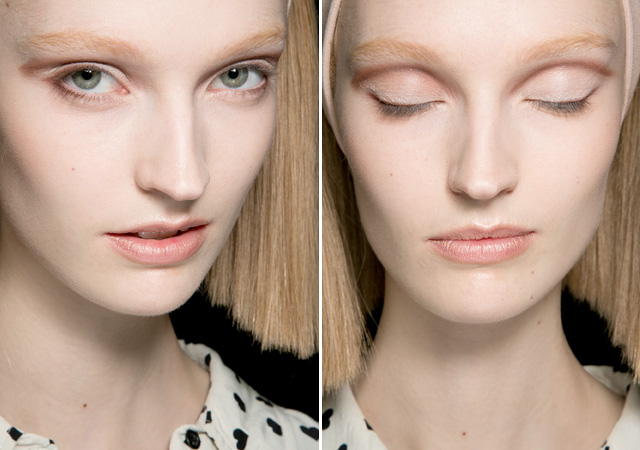 Marc Jacobs’ show was the center of attention with Kendal Jenner’s nipple revealing outfit. But the only thing I could pay attention to were the awesome bleached brows and graphic outlines of the crease and lower lashline. Key-artist François Nars dusted a light Grey shadow over the lid and accented by “touches of chocolate” outlining the crease and lower lashline. Brows were bleached and then dyed the same shade as the wig. NARS Lip Gloss in Striptease was dabbed onto the lips lightly. 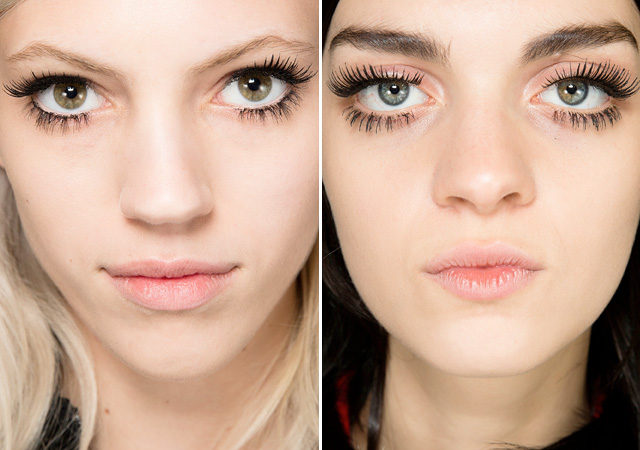 I la la love this look created by key-artist Lucia Pieroni. The multiple sets of lashes add drama, but still manage to make the girls look girly and rebellious. It’s pretty, without being too neat. Lucia used a whopping amount of three lash-sets per eye: A full set was placed first, with another set stacked on top with the ends trimmed off and then stuck back on in the center above the iris. Another set was layered on top of that for thickness. For the bottom lashes, a set was cut in half and overlapped in the middle. Lucia finished by swatching a shimmery Champagne shadow across the lid and a Taupe for shading (Clé de Peau Beauté Eye Color Quad in 303). Lips were polished off with a flesh tone. 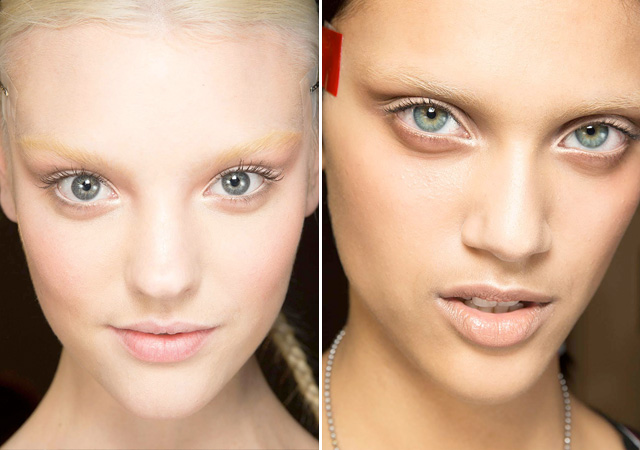 Mini face lifts, bleached brows,—more perfect than words—skin and a little bit of sculpting around the eyes. Givenchy hits the skin-trend-nail right on the head with this look. Skin was highlighted to shimmery perfection, Pinky-Peach blush dusted on cheeks, Beige shadow washed around the eyes, and white liner run along the waterlines. Brows were bleached and square-cut, Crimson “face tapes” applied on both temples. A string was secured underneath, pulled taut, and tied at the back of the head, giving the models a mini face lift. 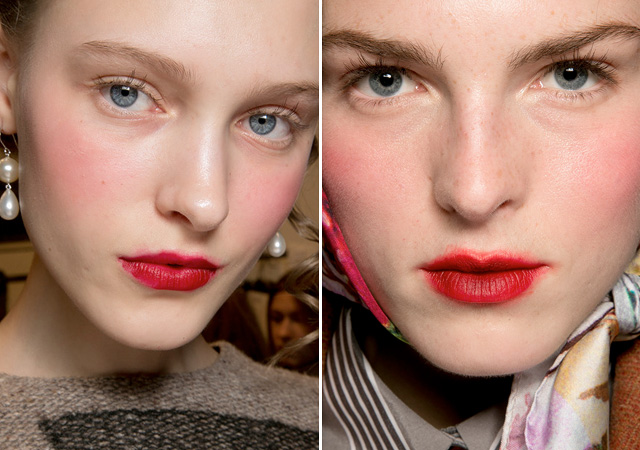 I can hear you thinking “how can this ever be your #2?”—How can it not be? The relaxed, almost “dirty” looking mouth paired with that luminous, silky skin and flushed cheeks looks like a creative spree to me. It gives impact on the runway, without over thinking it. Key-artist Val Garland used the same products on both lips and cheeks. She mixed together MAC Lipmix in Red and Orange and stippled the mix onto cheeks with a duo-fiber brush. The same color mix was painted around the outer edges of the mouth, then smudged in toward the center and out past the natural lip line. 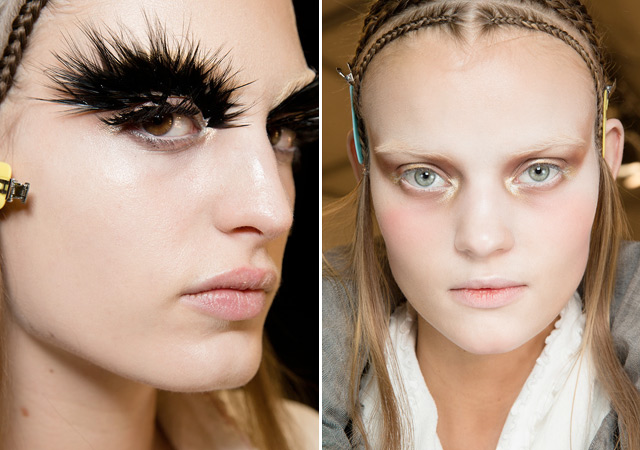 Fashion alien realness. The sculpting and highlighting around the eyes has my jaw on the floor. The feathery crease and lashes just top this perfection to a higher level. Key-artist Pat McGrath used self-designed Black spiky feathers and glued them one by one onto the brows and lashes. For the alienesque sculpting around the eyes Pat used brick Red, Silver, and Gold metallic pigments to give the face a futuristic feeling.

What were your favorite beauty looks at all the 2014 Autumn/Winter fashion weeks?